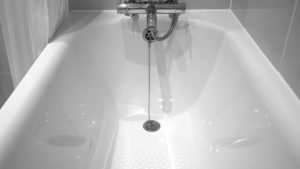 The Eureka! moment can hit at the most unexpected of times. Some of the most significant scientific breakthroughs and useful inventions have first flashed in to someone’s brain when they were in the bath, cycling to work, walking the dog or sitting on the toilet (well maybe I made the last one up but I bet it has happened). The humble but highly useful Post-It note for example was invented by a churchgoer frustrated that leaflets and bookmarks kept falling out of his hymn book.

Greek scholar Archimedes is rumoured to have run through the streets naked shouting ‘Eureka’ after realising that watching the water rise as he got in to the bath had just helped him to find a way of measuring the volume of irregular objects. Television was allegedly conceived by a teenager ploughing a potato field, and Velcro, the solution for any mother with children incapable of tying their shoelaces, was invented after a dog walker came back from the woods with irremovable burrs all over his trousers.

Cambridge physicist Dr Nick Hill, already conducting groundbreaking research into RFID technology, was sitting at his kitchen table one day having a cup of coffee when his cat Flipper caught his eye. Flipper had been giving him a few headaches after switching to a magnetic catflap when the neighbourhood moggies had all been inviting themselves in through the old one. Flipper didn’t get on with his magnet and collar, kept losing it or clawing it off, and was often left out in the cold.

Dr Hill, somewhat preoccupied with his research work, suddenly had a brainwave. A Eureka! moment. What if he applied his RFID technology and came up with a catflap which worked with his cat’s unique microchip? Three years later his SureFlap catflap was launched, which is now award-winning. When he sat down for his morning coffee that day he probably hadn’t imagined how his  scientific work would take him in a completely different direction to the one he had imagined.

I live in hope. I’m just off to have a coffee, feed the cat, walk the dog (actually I don’t have a dog so it will have to be someone else’s), sing some hymns and soak in a bath. If none of that works I will see if anyone has a potato field they need ploughing. I will let you know how I get on.

After Google Analytics, the next most important tool for your... END_OF_DOCUMENT_TOKEN_TO_BE_REPLACED

How do people reach my website is one of the... END_OF_DOCUMENT_TOKEN_TO_BE_REPLACED

Even the most innovative technology needs support to keep it... END_OF_DOCUMENT_TOKEN_TO_BE_REPLACED